One August afternoon in 2019, Maria was wrapping up a workshop with rural small hold farmers, explaining how they could break free from growing coca, the cocaine crop, and start growing coffee instead.

“We received the news that a mountain was burned by unknown people… we knew it was the dissidents,” she says, and the coffee crops had gone up in flames.

Then a local man told her the local leader of that group wanted to see her. She got in the car, telling herself it would just be about money.

“But then when… they put my head down and put the weapon in my body, I understood it was not good,” she says.

Maria* was driven to rural house, threatened and tortured as “punishment” for her work helping peasants and children out of the cocaine trade and advocating for women’s rights. Then four men took her into another room.

“I just begged “don’t murder me”. I have my daughters. Do whatever you want, but just don’t take my life.

“And then your life changes. You are not the same person anymore.”

Maria was raped. She’s not sure by how many men.

Crop substitution projects like Maria’s are a key part of Colombia’s historic 2016 peace agreement, which ended a bloody 50-year civil war between the government and the far-left FARC guerrillas – once the most powerful rebel force – and other armed groups.

The programme is designed to help rural people – who previously had little choice but to sell coca to armed groups funded by the cocaine trade, or who were displaced – to return and take up legal forms of farming.

Immediately after the agreement “it was like living in the promised land”, says Maria, who could finally “work without fear”.

Anti-personnel mines that had been laid to defend coca plantations were gradually removed and guerrillas who controlled the area ceased fire.

Then in 2018 Colombia elected a new president, Ivan Duque, from the right-wing Democratic Centre party, which had fiercely opposed the peace deal with the FARC. Duque had campaigned on a platform to “modify” the peace agreement.

Duque’s undermining of the terms of the agreement, combined with the state’s historical struggle to wrest control of rural areas from armed groups, is the unfortunate, perfect “equation” for today’s violence, according to Andrés F Aponte González, researcher at the Bogota-based Ideas for Peace Foundation.

Since 2018 the number of massacres in Colombia has grown constantly, with 2020 recording the highest number since 2014, according to the United Nations. And it has become the deadliest place in the world for environmental defenders.

Global Witness documented 65 killings in 2020, of which 17 were related to the crop substitution programme.

Social leaders who promote the programme are “attacked by illegal armed groups that live off economic resources produced by drug trafficking and they aren’t interested in the elimination of coca crops,” says Diana Sánchez, director of Minga, a Colombian human rights organisation.

Subscribe to ClimateCast on Spotify, Apple Podcasts, or Spreaker.

Land defenders – which can include social leaders and farmers – are counted as a distinct but related group with environmental activists, in recognition that land use is critical to tackling the climate crisis.

Many complain of a high levels of impunity for the perpetrators responsible for attacks on those seeking to defend Colombia’s natural world, one of the most biodiverse in the world and rich with natural resources.

The Colombian government declined a request to comment, but highlighted successful prosecutions and its specific policies to protect environmental defenders. It has set out new environmental crimes in its criminal code – including in relation to deforestation – and strengthened sentences for existing crimes like ecocide.

The Duque administration blames the threats and assassinations of social leaders on organised armed groups, which it says have continued to feed on drug trafficking and illegal mineral extraction.

But defending the environment in Colombia is also dangerous because the government “strongly promotes economic extractive politics, which means the exploitation of oil, carbon, gold and other valuable minerals,” according to Sánchez. 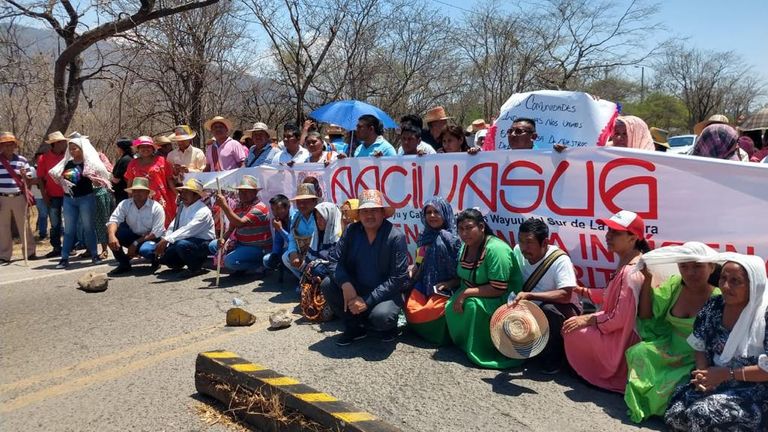 “This also generates a lot of deforestation in areas where peasants, indigenous and Afro-descendent people live.”

“All the indigenous and black leaders have been threatened,” says Armando Wouriyu Valbuena from the Wayuu indigenous community in the northeastern tip of the country.

He is the secretary general of a high level ethnic peoples body, a role set out in the framework of the peace agreement.

Colombia is home to 2.3 million indigenous peoples – who occupy a third of the land – five million afro-descendants and a number of smaller groups. Much of their land is rich with fossil fuels, water and wind.

The growth in “the farming, mining and oil frontier” is why “Afro and indigenous people are persecuted,” says Valbuena.

Some are forced to leave collectively by the threats, others by dispossession of property, and others by the presence of anti-personnel mines, he says.

At this year’s COP26 climate talks new pledges recognised the crucial role of indigenous peoples in protecting forests and nature, attempting to integrate their rights and knowledge into the effort to curb the climate crisis. For too long around the world they have been forced to compete for the right to access and protect their own land, including in Colombia.

Civil society groups are calling on the government to ramp up its implementation of the peace agreement. “We have to return to the spirit of [it],” says Aponte González. “It was an opportunity to change… how the state was trying to integrate these marginalised spaces and populations.”

Before the peace agreement was adopted in 2016, Colombians had narrowly rejected a previous version in a referendum. Many wanted peace but wanted all the armed groups in prison, says Aponte González, who wishes the benefits of the agreement had been spelled out more strongly.

For Valbuena, greater public pressure on the government to mitigate and investigate “massacres, disappearances and so on” would greatly help.

“It’s the only way to allow us to breathe a bit, to relax and one day see peace,” he says.

There is also some hope for the Escazú Agreement, a Latin American pact designed to slow climate change and protect environmentalists. But Colombia has not yet ratified it as “the government’s legislative benches haven’t wanted to” says Sánchez.

Although Maria escaped with her life to tell her story, she and her daughters are now in hiding, banking on a successful asylum application to leave the country for good.

“Many of our loved ones, they are just murdered, or the kids just disappear,” she says.

“I just want to tell you why I am speaking now about it: because I have been silenced for too long.”

The United Nations recently praised the fact that the peace process had taken “deep roots,” but urged all Colombians to follow its steps.

If not, there will surely be many more Marias.

*Some names have been changed to protect identities.

COVID-19: All countries on red list to be removed and travellers allowed to leave hotel quarantine early

A research revolution: science, genes, and sport in Qatar

Jailed Iranian musician: ‘We need human rights… not a…

COVID-19: Ministers banking on boosters to avoid a shift to…

10 Valentine’s Day meals and desserts you can have…