France's Karim Benzema celebrates with teamates Kylian Mbappe and Lucas Digne, after scoring their side's first goal during the match between Finland and France.

With one year to go before the 2022 World Cup kicks off in Qatar, more than a dozen teams have now booked their place.

England qualified in style with an emphatic 10-0 win over San Marino in their final Group I fixture, while French duo Karim Benzema and Kylian M’Bappe both netted as the defending Champions denied Finland a chance of being at the big event.

Didier Deschamps’ men top Group D ahead of Ukraine and join Germany after Hansi Flick and his players proved too strong for their opponents in Group J.

Other European teams heading to the World Cup include Belgium, Croatia, Denmark, the Netherlands, Spain, Switzerland, and Serbia, after Fulham striker Mitrović scored a 90th-minute winner against Portugal to pip Cristiano Ronaldo’s team-mates to first place.

This means the Manchester United forward will have to wait for Europe’s play-off deciders in March to see if he’ll be making the trip to Qatar. 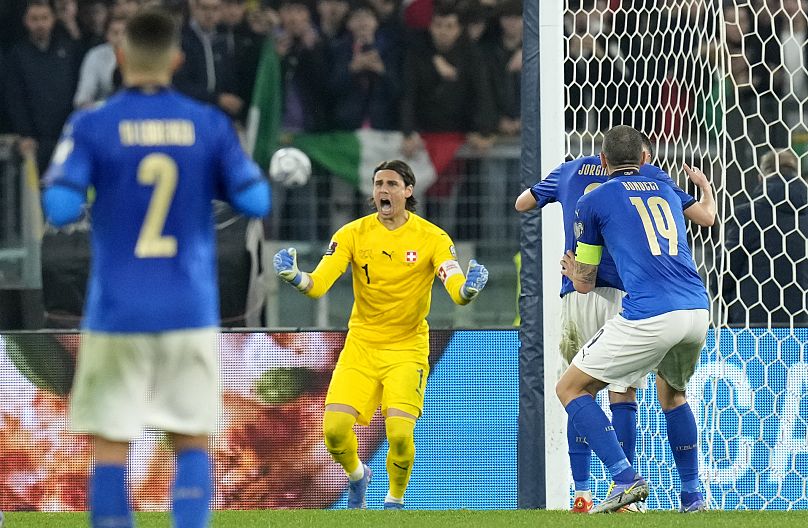 Switzerland goalkeeper Yann Sommer celebrates after Italy’s Jorginho missed a penalty during the match between Italy and Switzerland on November 12, 2021.Gregorio Borgia / AP

Italy has also failed to automatically qualify after they finished two points below Switzerland in Group C. They join Sweden, Russia, Scotland, and Wales as the seeded play-off nations.

These must-win games against the remaining unseeded sides will begin with six single-leg semi-final matches played in late March next year.

Thirteen teams have officially qualified so far, leaving 19 spots to be filled in the upcoming months en route to the big event, which kicks off on November 21 next year.

Greensill collapse: £335m of taxpayers’ cash at ‘increased risk’ due to ‘woefully inadequate’ checks on firm David Cameron lobbied for

Prince Andrew: Trial looms for the Duke of York as judge’s…